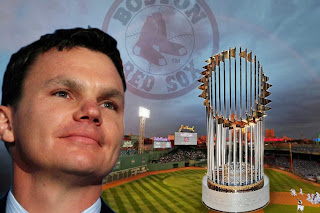 When you construct a team that goes from worst to first and wins the World Series, championship rings are not the only reward.

Boston Red Sox general manager Ben Cherington has been named The Sporting News 2013 Major League Baseball Executive of the Year, as selected by a panel of 31 major league executives.

Cherington is only the third Red Sox executive to win the award, following Tom Yawkey in 1946 and Dick O'Connell in 1967 and 1975.

"I've always felt this award is about the organization, not the GM. I understand the GM is receiving it, and I'm happy to receive it, but I'm proud of the organization. This is for everyone who works for us and went through a tough time in 2012, and committed to making things better, getting things right. I'm not sure it was necessarily a World Series outcome we had in mind, but we were fortunate that the people in our clubhouse accomplished great things. It was fun to be a part of."


The Red Sox GM was the architect of rebuilding a Sox team that lost 93 games in 2012. Cherington shed a quarter billion dollars in payroll in a trade with Dodgers in the summer of 2012, fired manager Bobby Valentine that fall, hired skipper John Farrell and signed "character guys" that could actually play in Shane Victorino, Mike Napoli, Stephen Drew, Jonny Gomes and Koji Uehara over the winter.

Despite the World Series win and the Sporting News award, Cherington's work is not done. Decisions need to be made on free agents Jacoby Ellsbury, Mike Napoli, Jarrod Saltalamachhia and Stephen Drew.