Braves announce new stadium, reminder why Fenway is one of a kind 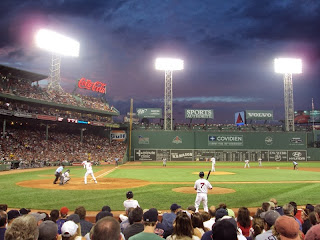 Fenway Park continues to stand the test of time. As the 101-year-old ballpark continues to be the crown jewel of Major League Baseball, other teams are looking into ways to add value to their seats.

Today, the Atlanta Braves announced they will leave Turner Field after the 2016 season in favor of a sparkling new park in Cobb County northwest of downtown Atlanta, becoming the first professional team to leave the downtown area for a spot in the suburbs.

Turner Field was built for the 1996 Summer Olympic Games and converted into use by the Braves, ending the existence of Atlanta Fulton County Stadium. That park saw Hank Aaron’s 715th home run, breaking the all-time mark (714) set by Babe Ruth. It also saw Atlanta’s only World Championship, the 1995 World Series Champion Braves.

With the announcement, the Braves are doing two things here:

1) The organization has recognized where the majority of its business lies. Atlanta as a downtown area is not that great. If you’ve never been, don’t worry. You’re not missing out on much. This will bring the action closer to the fans of Marietta, Ga., and an area that is booming with successful businesses and a wealthy class of people.

2) The Braves are basically saying their less-than-20-year-old stadium is out of date. Turner Field is a very nice stadium, has great views and was a welcomed change from Fulton County Stadium. But it was built quickly for the Olympics and not much was considered for the future of the structure. They knew they could turn it into a baseball stadium, but that seems to have been as far as the discussion went.

This forward way of thinking only proves even more that Fenway is special. Fans of Boston have age-old stories to tell, rickety seating areas, small clubhouses and less than state-of-the-art facilities, some of the worst sight-lines in baseball, the smallest concourse space and a small park for such a large market.

And Red Sox Nation wouldn’t have it any other way.

Sure, sometime down the road, the futuristic and spacious designs will be desired. But for now, Fenway is perfect. It’s our park. It’s a park that has seen so much and will hold a special place in the hearts of New Englanders forever.

The same can’t be said for that stadium down south. Turner Field is soon be a foregone memory and nothing more.