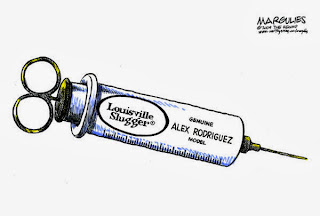 A news article released by the New York Times on Sunday night has stated that Alex Rodriguez tested positive for stimulants in 2006. It is known that Rodriguez used steroids from 2001-2003, something that he admits to taking. This report should come as no success, but instead may be one last push for Bud Selig before he retires after next season. Selig made a statement on Sunday saying "Our Biogenesis investigation lead to 13 players being disciplined without challenges, Only one player challenged and attacked every part of the process, and I believe that says more about his misconduct than it does about any alleged behavior by our investigators."
The article discusses private investigators, people being given a subpoena, a relationship between a biogenesis nurse and an investigator, to much more. To read the full article in the New York Times click here.
Does this surprise you at all? Almost everyone suspects that Rodriguez has been lying about his participation in the Biogenesis clinic. Does this report change your mind at all? Is the MLB on a witch hunt to get Rodriguez or is he just trying to run and cover the truth for as long as he can? Leave your answers in the comments section below or tweet me.