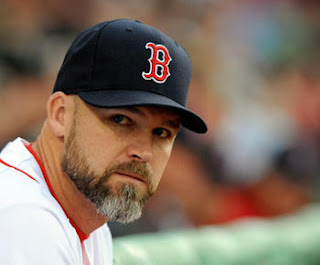 David Ross was brought to Boston last offseason as a free agent to be the backup catcher to Jarrod Saltalamacchia and a veteran presence in the clubhouse. He was successful in both these roles. Lets dive deeper into his evaluation.

OVERVIEW:
Ross had a good year as a backup catcher. He came alive during the postseason and took the role from Saltalamacchia. The Sox may have expected more on the field from Ross but he delivered when working with the pitching rotation, a major reason that he was brought to the team.

2013 REGULAR SEASON:
During the regular season he was behind the plate for 36 games, and was the primary catcher for Jon Lester. He hit .216 on the season and had a 0.7 WAR (Wins Above Replacement) rating. Ross had 5 doubles and 4 home runs while driving in 11 RBI's. He had a difficult time at the plate and was victim to a large number of strikeouts, 42 in 102 at bats (over 40%). Behind the plate Ross was good in the 36 games he played in. He had a fielding percentage of .997 committing only 1 error on the year. He participated in 2 double plays and had 13 assists. 19 opponents base runners stole a base off of Ross but he caught 13 runners stealing for a caught stealing percentage of .406.

2013 POSTSEASON:
Ross really stepped up to the plate both figuratively and literally when Saltalamacchia struggled in the postseason. In the 8 games he played he went 6-25 (.240 average) which was not much better than Saltalamacchia. His biggest moment of the postseason was Game 5 of the World Series when hitting a ground rule double off of Adam Wainwright that proved to be the game winning run. Ross also took over for the last 3 games of the World Series after games 2 and 3 that had 2 throwing errors from home plate to third base.

2014 Prediction: Ross will be a good backup for whoever comes to fill the role of catcher for the Red Sox, either Saltalamacchia or possibly Brian McCann.

Agree, disagree? Let me know in the comments section or tell me on twitter.