Shipping out of Boston? 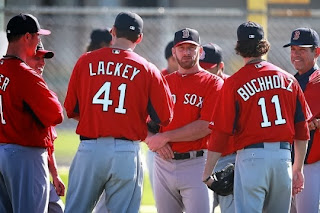 The starting pitching rotation is an area of the team that the Red Sox have a surplus in, it may also be an area that general manager Ben Cherington may be looking to trade for other positions. The Red Sox have pitchers Jon Lester, Clay Buchholz, John Lackey, Jake Peavy, Felix Doubront and Ryan Dempster all under contract through the 2014 season at the least. That's 6 starters fighting for 5 spots. There are also youngsters waiting in the wings to take over if needed be. These youngsters include some familiar faces that came out of the bullpen this postseason including Brandon Workman and Allen Webster who started 7 games in the 2013 regular season for the Red Sox.

The Red Sox rotation was a huge reason for their winning of the World Series and some players may be able to bring in a bigger trade value now due to that success. One of these pitchers being John Lackey. Lackey pitched 29 games in the regular season and compiled a 10-13 record but in his 4 postseason starts he compiled a 3-1 record and allowed only 8 runs in 26 innings pitched. Lackey may be the pitcher that Cherington has hinted at as being contacted by other team for a trade.

Cherington said Monday that he is looking to add another fielder that can play the left side of the infield. It would be assumed that the Red Sox will start Middlebrooks at third and Bogaerts at short stop next season so the addition to the left side would be a backup or replacement for either of these starters. Cherington also wants to add a catcher to be the #1 in front of David Ross if the Red Sox are not able to re-sign Jarrod Saltalamacchia.

The Red Sox should wait until they sign the free agents they want or see if they sign elsewhere before they make a trade that involves someone that was part of last seasons rotation. Who do you think will be traded if a trade actually happens? What do you think a fair trade would be? Leave your trade scenarios in the comments section or let me know on twitter.