Ben Cherington: We're going to be choosy at catcher 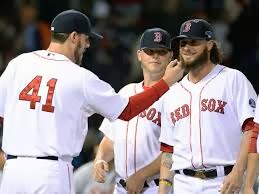 Ben Cherington has said that the Red Sox will be choosy at catchers, given the young options at catchers they have at their disposal, according to MLB Trade Rumors. Right now, the Red Sox have David Ross and Ryan Lavarnway on the roster and presumably, they would split the duties if they Sox don't make any moves this off season. They could, of course decide to re-sign Jarrod Saltalamacchia and have Ross as a back up. Or they could sign Dioner Navarro at catcher, presumably. Either way, the Sox are not short of options at catcher.

Here's what Cherington had to say, per WEEI:


“We kind of thought that might be a position that moved quicker just because there seemed to be sort of a set of teams and a set of somewhat comparable, somewhat equal players and the musical chairs would start. I guess that leaves us still talking,” said Cherington. “We have interest in a small handful of free agents. We’ve also talked to teams about trades. And we also think we’re in a pretty strong position long-term with the young catching we have in the organization and so we have, we’re in a position to be a little choosy, a little selective. If we could do something there, we’d love to. So we’ll see what happens.


Popular opinion as far as I can tell from comments and tweets I get seems to be to re-sign Salty, but let's not forget that we do have options. Salty is currently the best available catcher on the market, but I have my concerns about his defense.