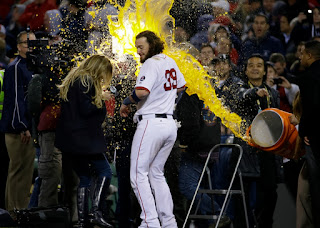 The Red Sox are NOT likely to extend a qualifying offer to Jarrod Saltalamacchia for the 2014 season.

According to a source from WEEI.com, the Red Sox feel that a one-year $14.1 million offer is a little too high a price for a guy who was essentially benched during the World Series due to excessive brain farts behind the plate.

Salty will have the freedom to negotiate with all 30 MLB teams (that includes the Red Sox) moving forward without the fear of said teams giving up a first round draft pick - can you say incentive.