Why have the Sox waited on Salty and Napoli? 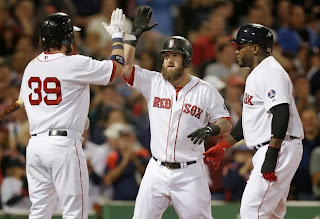 It's an interesting thought to ponder - why are the Red Sox so hesitant to re-sign any of their free agents, especially Mike Napoli and Jarrod Saltalamacchia? It's definitely a little frustrating to watch them move slowly. Both Napoli and Salty have expressed interested in coming back to Boston, so why are they waiting? Well, sit back and I'll try to explain. Here are my 5 reasons that they could be waiting.

1.) They are waiting to see how the market develops for them, aka sizing up the competition: This is certainly the case with Mike Napoli, as Nick Cafardo tweeted out yesterday (see below), and they could be doing the same with Salty as well. They probably want to see who is involved/what kind of money is invloved so they can match or beat whatever is on the table.

2.) Exploring other options: They have and could still be exploring other options, especially at catcher. But with both Brian McCann and Carlos Ruiz off the table, Salty is the best option on the market, at least offensively. As for 1st base, there aren't too many options abailable to the Red Sox, unless of course, they put together a convincing trade offer to Anaheim for Mark Trumbo. Also, NESN is reporting that Michael Young has reached out to the Red Sox and Orioles, so that could be something to keep an eye on.

3.) There's a gap on the length and $$$ involved in re-signing both of them: Reports have Mike Napoli asking for 4 years and $68 million, which the Red Sox may be unwilling to meet. As for Salty, his demands are unclear, but there could still be a gap in what he's asking for vs. what the Sox are willing to give him.

4.) The Red Sox are complacent: I hope this isn't the case, but the organization might be thinking that since both of these guys have expressed interest in coming back, there's no real rush to re-sign either of them.

5.) The Red Sox are going to focus on developing young players: This is about the catcher's position more than first base because the Red Sox have Ryan Lavarnway waiting in the wings, plus a couple of other young catchers in the farm system. This could also mean that the Red Sox would rather get a draft pick in return for Napoli. Remember - they made Napoli a qualifying over, but not Salty, so they'd get a draft pick as compensation if Nap signs elsewhere.

Thoughts? Just want to vent about the lack of activity of the front office? Leave a comment or tweet me (@ConorJF1016).