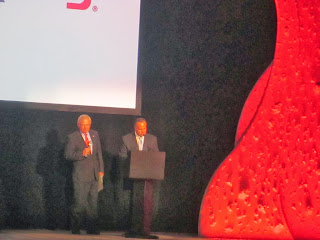 Tonight was a much anticipated event in Red Sox Nation - the night of the premiere of the World Series DVD from MLB productions. For the most part, there's a great buzz surrounding these releases because the fans can finally watch their team win a championship again...and again..and again, until their hearts are content. And a few hundred lucky fans got a chance to watch an advance screening of the film with the Red Sox ownership group and few players. My dad & I were both there, and let me tell you, it was well worth it.

It was pretty sparsely attended from a player stand point (only David Ross, Will Middlebrooks and John McDonald were there), but ownership was there and several members of the local media were there. Joe Castiglione and Don Orsillo (pictured, left) introduced the event and Jenny Dell (pictured, below) was interviewing people in the lobby. Red Sox legend Jim Rice was also there. 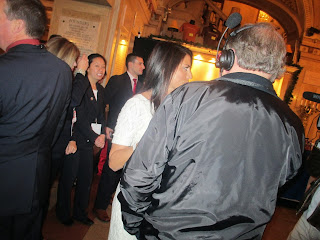 And of course, we can't forget the always lovable Wally (pictured below). He was there, doing his thing and being Wally. 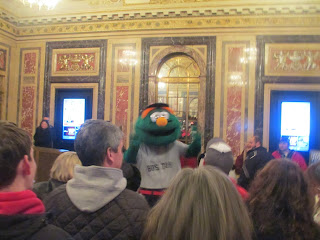 One of the best moments of the night was when Joe Castiglione asked David Ross (pictured below) about his huge game 5 double, and Ross responded by asking "Who hit it?" That was a classic David Ross moment. 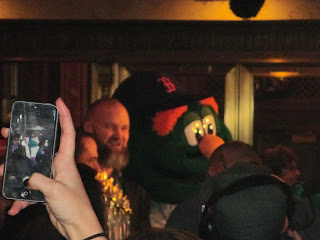 As for the movie itself, it was narrated by Ben Affleck. It started, as you my expect, with the Boston Marathon Tragedy and focused on the events surrounding Marathon Monday and the days after before going back to Spring Training and discussing the new signings and how the team gelled. After that, it was a short recap of the regular reason before breaking down the ALDS, ALCS, and the World Series and the celebrations that followed. Seeing it all unfold again was especially satisfying and emotional at times, especially when they were replaying the Marathon bombing and highlights of the first game back at Fenway.

So make sure you get it, Red Sox Nation. Put it in a loved one's stocking or give it to someone as a Chanukkah present. Just don't pass on this - it's satisfying to watch the "Team of Destiny" or "Impossible Dream 3" come to life..again. It comes out tomorrow for everyone to enjoy. So it'll be a great thing to look for on Black Friday, so don't miss it.

*all photos from the author