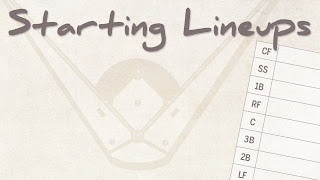 With recent roster changes and Spring Training already less than 60 days away there is no time better than the present to predict the 2014 Boston Red Sox lineup. The Sox have lost speed at the top of the lineup in Ellsbury, speed that cannot be replaced, and an average, but often striking out Saltalamachia from the bottom half of the lineup.

Leading off: Shane Victorino RF
Hearing "Don't worry about a thing, 'cause every little thing is gonna be alright" echo around Fenway Park after the walk-up music ended became a staple late in the season, and fans can look forward to singing this song more often this year. Victorino hit second last season but due to the loss of Ellsbury, Victorino will step up to the the plate first each game for the Sox this year.

Second: Dustin Pedroia 2B
Pedroia has hit in the second spot before and has had success in the position. He was pushed back to the 3 hole last year after the Victorino acquisition but due to Ellsbury leaving he will again hit out of the 2 spot. Farrell has already said that he would like to see Pedroia here.

Third: David Ortiz DH
In order to provide protection for Ortiz he will have to move into the 3rd spot, vacating the cleanup spot he held last season. This could give Ortiz more at bats this season and will have more chances to terrorize opposing pitchers.

With Napoli and the beard returning to Boston, David Ortiz will remain protected in the lineup. With Napoli hitting directly behind Ortiz it will limit the amount of walks that Ortiz draws, especially in situations when there are runners in scoring position and first base open. Napoli is the perfect fit to hit cleanup next year.

Fifth: Will Middlebrooks 3B
Middlebrooks struggled last postseason and ended up being replaced by Xander Bogaerts. I would like to assume that this lit a fire under his butt and that he has been hard at work all winter working on his hitting. If this is the case I assume that he will come back with more power and be more consistent at the plate.

Nava and Gomes will battle it out for the starting spot in left field with Nava narrowly beating out Gomes for the starting spot. Nava will provide a bit of power behind Pierzynski and a little bit of speed in front of Bogaerts. Last season he hit 29 doubles, and if he can do the same in this spot he will drive in a lot of runs and score a lot of runs because of the guys behind him.

Eighth: Xander Bogaerts SS
Bogaerts got the nod last postseason when Middlebrooks slump reached a critical point, and now that it looks as if Stephen Drew will not be returning to the Red Sox then Bogarets will get the starting role at shortstop. Bogaerts has not yet proven himself in a long season in the Majors so he will start low in the order but expect him to climb his way up throughout the season.

Ninth: Jackie Bradley Jr. CF
JBJ will fit in nicely in the final spot of the lineup. He has speed so once making it through the lineup once there will be a back to back speedy combo between JBJ and Victorino. JBJ has not had much time in the majors to prove himself against major league pitching. With more experience and continued success JBJ will move up the lineup quickly, but starting him last is the smartest idea.

This is my projected lineup for the current Red Sox team. If there are additions or subtractions before the season begins it is likely that the lineup will change. What do you think about it? What would you switch around, who should go where? Leave your lineup's in the comments section or tweet them to me.