Fenway Park opened it's doors on Saturday and allowed hundreds of die hard fans to come in and enjoy the weather,take a picture with the three World Series Trophies, meet past and current players, check out the loads of memorabilia at the Yard Sale and of course buy some tickets for the 2014 season. While many talked about the 11th Annual Christmas at Fenway event, few were able to attend the winter time classic. Redsox.com gave fans a chance to attend the event though an online raffle, and if you were one of the lucky ones chosen, you were able to go and attend the festivities on the cold December day. 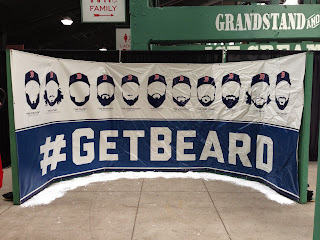 While it was cold outside, there was plenty to do to keep you warm. In the Royal Rooters Room, NESN's Jenny Dell kept the crowd entertained with her animated interviews of 2013 World Champions Craig Breslow and Ryan Lavarnway, coaches Juan Nieves, Brian Butterfield and Victor Rodriguez, and Director of Professional Scouting Jared Porter. Outdoors, Tom Caron kept things festive and held his own interviews by the Christmas tree, and Fenway Ambassadors treated fans with the three World Series Trophies, an ice sculpture, a raffle to win Red Sox items, and yes, even Santa Claus.

While there was a lot to do around the stadium, most people came to Fenway to buy tickets to select April and May games, as well as "Sox Packs," a four game set of tickets to popular games like Dustin Pedroia bobblehead night, Yankees games, and the annual Patriots Day game. Things went smoothly for fans, as they received bracelets with numbers as they walked into the stadium, and when their numbers were called, they were able to wait in line to get the tickets they were hoping for.

Overall, the experience was a pleasant one; I listened to Craig Breslow talk to Jenny Dell about his recent honeymoon, and discuss how he loved playing at Fenway because it felt like 36,000 of his family members were watching every pitch. Ryan Lavarnway revealed that his favorite color was purple, and Jared Porter told the crowd that he got his start with the Red Sox as an intern after he was interviewed by none other than now-General Manager Ben Cherington. 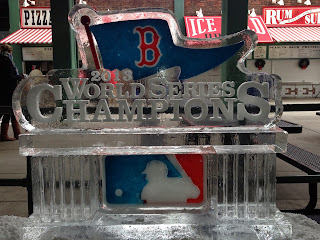 While there is still close to 100 days until the first pitch of 2014, it was great to get back to Fenway and take in the smell of their recent championship. The air might not smell of hot dogs and beer anymore, but if you walked to the bleachers and closed your eyes, you could imagine the noise after strike three was called and the Sox raised their hands in a season of unbelievable triumph. Until April!