With the MLB Winter Meeting in full on schmooze mode, the hot stove is heating up. It's no surprise that the Red Sox are in the middle of the rumor mill and one name that keeps popping is Los Angeles Dodgers outfielder Matt Kemp.

The Dodgers $100 million outfielder has been mentioned in rumors all offseason. Now that the Sox have lost Jacoby Ellsbury, Kemp could be in play for Boston. 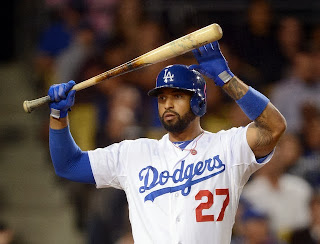 When healthy, Kemp is a force. He has two Silver Sluggers and two Gold Gloves. Kemp also finished second in the MVP race in 2011 when he hit .324 with 39 homers, 126 RBI and 30 steals. However, Kemp has not been able to stay healthy the last two seasons, missing 155 games with shoulder, ankle and thigh injuries.

The Dodgers have made it known they are ready to deal. The Sox are one of the few teams that could handle the six years and $128 million left on Kemps contract. Especially if the Dodgers are willing to eat some of the cash.

With Ellsbury in pinstripes, the Boston outfield is Shane Victorino, Jonny Gomes, Daniel Nava and a young Jackie Bradley Jr. A healthy Kemp would fit nicely into the mix.

The Carl Crawford, Adrian Gonzalez, Josh Beckett trade between Boston and LA worked great for both sides two years ago. Will the teams make another splashy deal?