Thanks for nothing, Ellsbury

Oh, Jacoby. You shouldn’t have.

No really. You really shouldn’t have.

Making its way around the interwebs today is a picture of a full-page ad that Ellsbury took out in The Boston Globe today, thanking Red Sox Nation for his time in Boston. See the picture below: 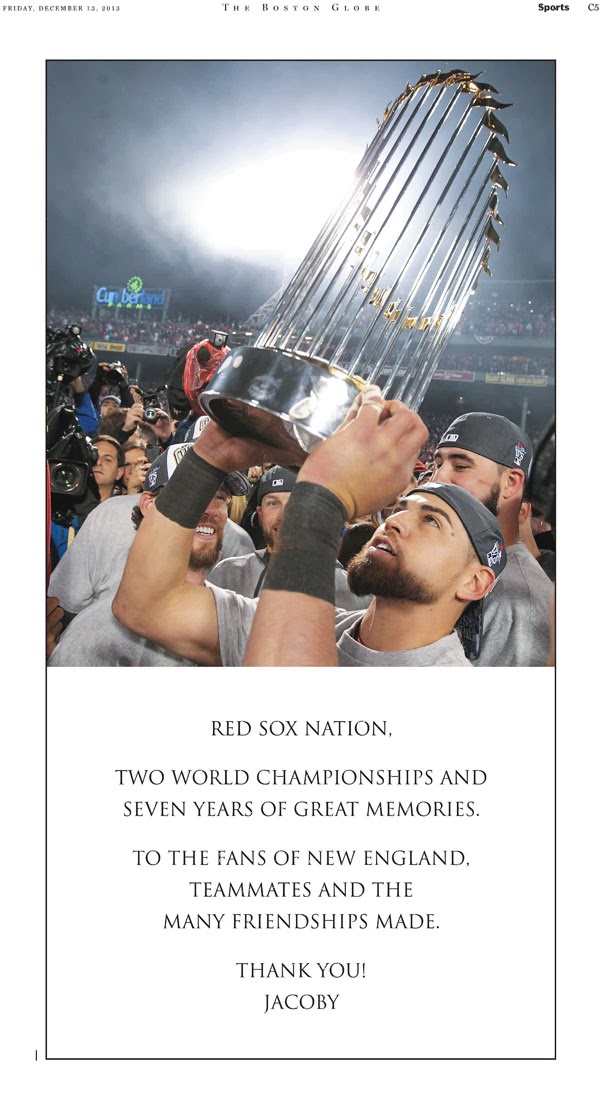 Let’s analyze this for a second…

1) It took a long time for Ellsbury to do this. Jarrod Saltalamacchia’s “Thank You” note was much timelier and much more heartfelt (see that one here). Ellsbury's deal broke Tuesday, Dec. 3 and he officially signed with the Yankees on Saturday, Dec. 7 (via Yankees press release). Salty agreed with the Marlins a day after Ellsbury (Dec. 4) and had his press conference Dec. 6. His "Thank You" to Red Sox Nation was posted on Dec. 9, a mere five days after his deal was announced by the media. Ellsbury's? Double that time: 10 days. It even feels like Ellsbury caught some grief for not doing something after Salty penned Sox Nation, so Ellsbury decided to call The Globe.

2) The ad is coming out on the same day he’s being introduced as a Yankee at a press conference in New York - on Friday the 13th, no less. Something’s just not right about that.

3) Umm, half the ad is a picture of you holding up the 2013 World Series Trophy? And the other half is a half-hearted note that is supposed to make me feel better about you leaving to go to the arch enemy? In a word … No.

4) Saltalamacchia writes a lengthy letter, in his own words, and posts it on The Globe’s blog “Extra Bases.” He was traded to Boston in 2010 and spent four seasons here. And he had a heck of a lot more to say than a simple, “Thank you.” ...

4B) Meanwhile, Ellsbury’s PR person had this brilliant idea to put an ad with Ellsbury’s face taking up half the page, a simple note and not a word of sincerity for an organization and fan base that drafted him, supported him and was his first home in Major League Baseball for the next SEVEN years (nine if you include his time in the Minors). Boston should have a special place in your heart. Clearly, it doesn't.

Am I wrong in thinking, “What a worthless piece of junk!” He certainly will fit right in with those Damn Yankees!