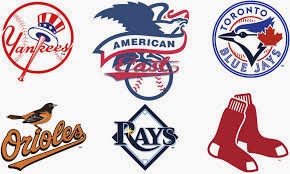 There has been a flurry of activity in the AL East, ranging from players leaving, trades, players coming in, and players being re-signed. So, with all of the activity, it's about time to take an early look at how the AL East will shape up.


It'll be a tight race at the top, but the Yankees free spending ways do not guarantee the AL East crown. In the end, the Red Sox talent will win out. Maybe I'm trying to make myself feel better, but part of me actually believes that this will be the case. Look, Jacoby Ellsbury is a big loss at the top of the line up but I do think the Red Sox have a great replacement in Jackie Bradley. Granted, he's still young with limited big league experience, but the kid has talent, and I think he'll do fine. Other than that, I think the Red Sox have made better moves than the Yankees in that they address our needs.