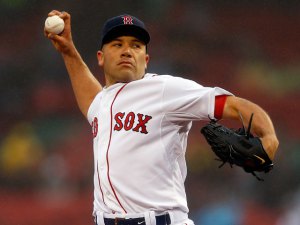 Quietly and without fanfare, Alfredo Aceves wandered out of Fenway and hit the road for the Baltimore Orioles minor league system, with an invite to Spring Training.

The 31 year old right handed reliever will get a reported 1.2 million if he makes the major league team, with incentives that could total up to 3 million dollars.

Yeah, that is about as likely as no snow in New England for the month of January.

As previously reported by Rob Bradford from WEEI, the Red Sox dropped him from the 40 man roster in July calling him, "...neither a 'reliable' major league contributor or major league depth."

Early in April of 2013 he was given a shot and was unable to get it on track ending up back in Pawtucket.

Known for being quirky or eccentric with regards to team unity and behavior, he was a model citizen down in Triple-A which shocked us all.

In June he was back with the Red Sox making some starts and showing some of his abilities without showing any attitude. It did not last though and in July the Red Sox outrighted him to Pawtucket and put him on waivers.

That was the last time we would see Alfredo Aceves in a Red Sox uniform.

With that all that remains to be said is, adios amigos, best of luck in the Minors.