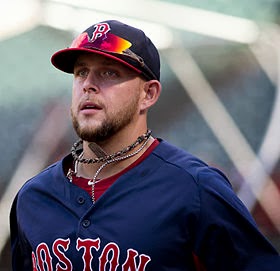 Brandon Snyder isn’t exactly what you’d call the face of the franchise. No, that’s reserved for the likes of David Ortiz or Dustin Pedroia.

Some folks in Red Sox Nation may not even know that Snyder is on the Red Sox roster. Well, sort of. Snyder was picked up last Spring Training, played some for Boston and was released just after the season. He then re-signed with the Red Sox, agreeing to a minor league deal and isn’t on the 40-man.

So when Snyder spoke up, via Twitter, regarding the Alex Rodriguez situation, it came as somewhat a surprise. Here’s what he had to say about A-Rod suing the MLB Players Association:

Absolutely disgusted with arods latest attack on the players association and the late Michael Wiener… the only people who fought for him…
— Brandon Snyder (@BrandonSnyder29) January 14, 2014

I didn’t have much left but whatever respect there was for him is long gone… I hope he never steps foot on a field again
— Brandon Snyder (@BrandonSnyder29) January 14, 2014

Some harsh words from a guy who is just on a minor league contract. But he speaks for ALL baseball players who are a part of the MLBPA. And quite frankly, he speaks for more than just them.

A-Rod has dug his grave with this recent lawsuit. The MLBPA has backed him from the beginning and the players have kept their mouths shut because they are a fraternity. A-Rod has turned even the most trustworthy group against him.

By doing so, many suspect the MLBPA will unleash details that he provided to them that may make his situation worse.

Sorry, punk. You’ve lost the battle and the war and soon you will find you have absolute no place in baseball.