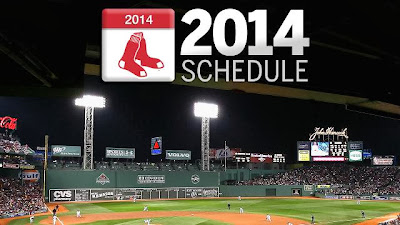 Happy New Year, Red Sox Lifer's. Spring Training is less than five weeks away - Mike Napoli should have been found by then.

Bring on some baseball and let's look ahead to five can't miss games for the 2014 season.

The Red Sox open the season at Camden Yards against the Baltimore Orioles. The "Red Sox repeat" T-shirts are ready and look for Jon Lester to take the mound as the title defense begins. What, you were expecting Clay Buchholz? He'll be on the DL by then after falling asleep in the Fort Myers sun.

Fenway will be the host of a coronation as the Red Sox are crowned 2013 World Series champions. The championship banner will be raised, the players will get their championship rings and Jacoby Ellsbury will hit leadoff for the New York Yankees. That reminds me...

The Red Sox welcome in the New York Yankees and latest Judas Johnny Damon Jacoby Ellsbury. The Sox will have a tribute, the pink hats will weep, Jacoby will steal four bases, Ryan Demptser will drill him in the ribs and the boos will be heard from the Fens to Falmouth, Maine.

Theo Epstein and his Chicago Cubs return to Fenway Park for the first time since Theo bolted Boston and took his gorilla suit to Chicago's North Side. Expect 4,344 interviews leading up to the series, but don't expect Larry Lucchino to get all "touchy-feely" with his former protege.

The St. Louis Cardinals make their way to Fenway Park for the first time since last seasons Game 6 World Series loss that sent them back home empty handed and crying in their Budweisers. Don't look for any interference from Will Middlebrooks in this one. He and Jenny Dell should be shacking up in Miami by then. The trade deadline is July 31. Hello, Giancarlo Stanton?