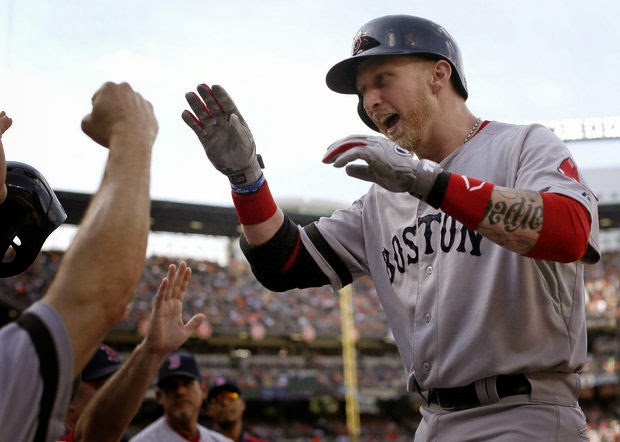 Last week the Red Sox avoided arbitration with Mike Carp and signed him to a one year deal.

This looked like a great backup to Mike Napoli at first base, with eventual help for the outfield, be that a very deep backup for eventual injuries. It gives Manager John Farrell a lot of options in a long season where you might need someone like Mike Carp who in 2013 was hitting .296 with 18 doubles, two triples, nine home runs, 43 RBIs and 22 walks in a career-high 86 games.

Then the Red Sox signed Grady Sizemore and it seems that the whole picture has now changed.

Some trains of thought lead to a trade of Mike Carp as they consider him bench dead weight.

It will most likely play out in Spring Training where the injury history and lack of playing time for Grady Sizemore over the last three years will be the deciding factor.

Expect the Red Sox to hang on to Mike Carp and see how all the outfielders settle into Spring Training. As that progresses they will most likely have a clear choice, be that using him in a trade or keeping him around to back up first base.

Can Grady Sizemore produce again and reduce the value of Mike Carp enough to win a spot on the Red Sox bench?