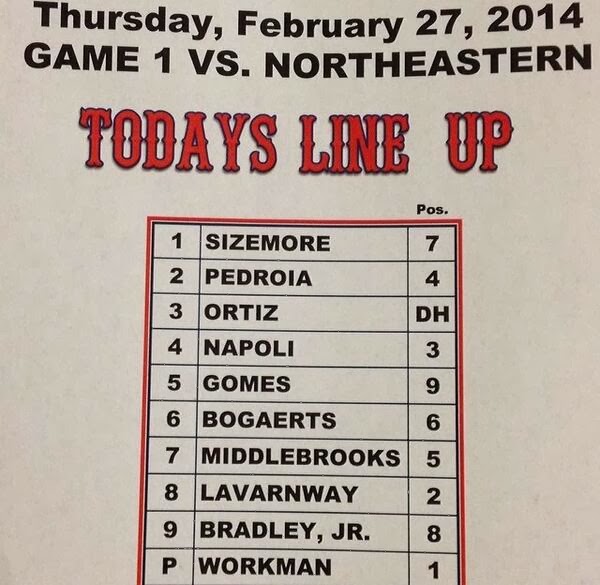 Yesterday the Red Sox opened their Spring Training schedule against Northeastern college as part of a double header.

After batting practice David Ortiz stayed on the field to sign autographs, chat with Northeastern players, and pose for photos.

One of the players who approached him was left handed pitcher James Mulry, a 20-year-old sophomore from West Roxbury
who would be pitching later in the game.

In the third inning he took the mound.

He was really working his curve against Mike Napoli as the first hitter, nearly catching him looking at a two-strike curveball to end the inning but umpire Steve Ward called the pitch outside.

Next was Dustin Pedroia who was fanned on a fastball for his first strikeout.

Then up came Big Papi, an intimidating sight to say the least, but Mulry got ahead of Big Papi and struck him out swinging at a slider off the plate.

Ortiz walked back to the dugout smiling as the crowd of 7,789 at JetBlue Park cheered Mulry.

"I was trying to see if I can get a strike to hit or whatever, but he ended up throwing me a nasty breaking ball," Ortiz said.

Walking off the mound to the dugout he had a smile on his face a mile wide.

"That was a lot of fun," Mulry said. "Usually my curveball is a better pitch, especially with a lefty. But the slider worked. I’ll never forget that inning. ... It’s unreal. I can’t compare anything to facing these guys."

One thing you can be sure of, James Mulry's girlfriend was all fired up.

The nice thing to see was that Big Papi took it all in stride, enjoying this Spring Training after missing a lot of last years. Ortiz said with a big smile, "He can have a drink tonight and say, ‘I struck out Papi.’ ”

No matter what happens in the years to come, he can tell the story of a warm Spring day down in Fort Myers to his grandkids.