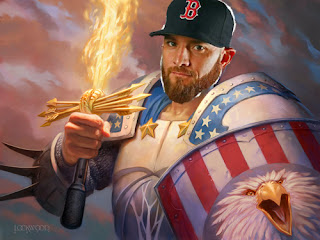 Boston outfielder and resident patriot Jonny Gomes picked out some Yankee Doodle Dandy-style duds for his Red Sox teammates to wear for their White House visit on Tuesday.

The World Series champions will be honored by President Obama and the Sox even sent the Commander-in-chief some new threads.

Hey @BarackObama, we have a gift for you for our trip on Tuesday to @WhiteHouse. Stars & Stripes blazers for all. pic.twitter.com/p3dmKQlo2E
— Boston Red Sox (@RedSox) March 26, 2014

Boston opens their title defense Monday in Baltimore against the Orioles. Besides the trip to the White House, the team is also planning to visit wounded soldiers at the Walter Reed National Military Medical Center.