The Milwaukee Brewers erupted for 4 runs in the top of the 9th inning to beat the Red Sox 6-2 in the Boston 2014 home opener at Fenway Park. All of the runs were charged to Edward Mujica who took the loss in relief. 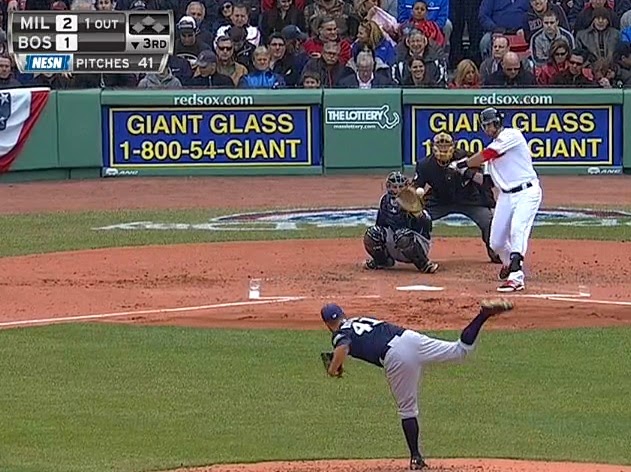 Milwaukee grabbed an early 2-0 lead in the top of the 2nd inning on a solo home run by Jonathan Lucroy and an RBI single by Carlos Gomez off Boston starter Jake Peavy. The Red Sox answered back with a Grady Sizemore RBI single in the bottom of the 2nd that scored Mike Napoli and a solo home run by Will Middlebrooks (pictured) an inning later.   It was the first home run of the year for Middlebrooks.

Boston starter Jake Peavy served up another quality start allowing just the first 2 Milwaukee runs on 6 hits and a pair of walks while striking out 4 in his 6 innings of work.

Before the game, the Red Sox players and coaches were presented with their 2013 World Series rings during an elaborate ceremony that featured the three most recent championship banners sequentially displayed from the Green Monster.