Fists and Fireworks in Fenway 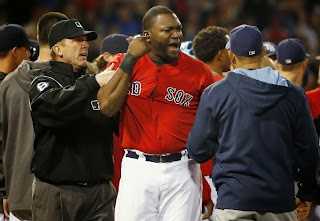 The first game of the 3 game weekend series against Tampa Bay had a little bit of everything. A benches clearing argument, 4 managers being used by Boston, the ejection of Red Sox starter, Brandon Workman and a walk off triple by AJ Pierzynski in the 10th inning started what should be an electric, possibly season defining series. Many Red Sox fans were outraged when Rays starting pitcher David Price hit David Ortiz in the first inning directly in the back. After the game Price said "I've got to establish my fastball in." where Ortiz was much more animated in his post-game statements, including "It's war, it's on."

Clearly Price will not be on the mound again this series, but with the recent physical history of these two teams, expect more heated words to be exchanged, and retaliation to be on the minds of many. Ruby De La Rosa gets the ball on Saturday and it has been said that people would not be surprised if he were to hit a batter with a pitch early in the game. Umpires will likely issue warnings before the game starts to both teams, but do not expect for that to cool off the heated rivalry.

If you could have your revenge against the Rays, what would you want the team to do, be the better team and forget about it or go directly after one of Tampa's best players? Leave your answer in the comments below or let me know on twitter. This could be season changing series, keep your eyes wide open because if you blink you may miss something.