Recap - Sox win a wild one in extras 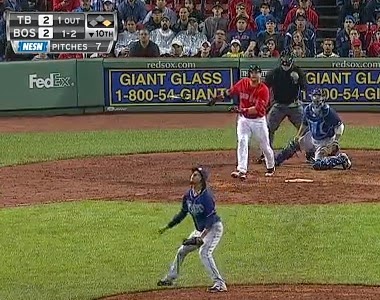 A.J. Pierzynski's shot into the Fenway Park centerfield triangle scored Jonny Gomes from 1st base with the winning run as the Red Sox outlasted the Tampa Bay Rays 3-2 in 10 innings. For Boston it was their 5th win in a row.

Tampa Bay took an early 1-0 lead in the top of the 1st inning on an RBI groundout by Ben Zobrist, and doubled that to 2-0 with an RBI single by David DeJesus.

The Red Sox cut the lead in half in the bottom of the 5th on David Ortiz's RBI single which scored Xander Bogaerts. Two innings later, Bogaerts tied the game with a Wall Ball double, scoring Jackie Bradley, Jr.

The real action, though, started in the bottom of the 1st inning when Rays starter David Price drilled Ortiz in the back which sparked some words from Ortiz. Warnings were issued to both benches which ultimately led to the ejection of Boston manager John Farrell. Both benches would soon clear with Ortiz making a bee-line for Price when, in the bottom of the 4th, Price hit Mike Carp. Following an on-field conference by all 4 umpires, Price was not ejected. Acting manager Torey Lovullo was thrown out while arguing.

In the top of the 6th, Red Sox starting pitcher Brandon Workman threw a pitch behind Rays 3rd baseman Evan Longoria which resulted in both him and Brian Butterfield being ejected. Are you with me so far?