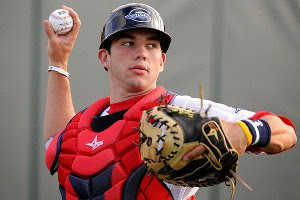 Blake Swihart has the potential to be the next Red Sox catcher of the future, especially with a team that currently has 2 "stop-over" or shirt term answers at the catcher position. Swihart is currently playing for the Red Sox AA farm team the Portland Sea Dogs and has put up impressive numbers there this year. He is the third ranked prospect in the Red Sox organization and is the 4th ranked catcher prospect in the minors. Swihart was drafted 26th overall in the first-year players draft in 2011 and has quickly risen through the ranks of the Red Sox system.

Swihart threw out 42 percent of all attempted basestealers in 2013, a percentage that lead the Carolina League. Swihart proved that he can play at the single A level so he was promoted to AA baseball before the season began, he currently has played in 26 games and is hitting .290 on the year. He has hit 2 home runs and has 16 RBI's so far. Swihart, a switch hitter is successful at both sides of the plate but is hitting for a higher average against lefties when he is hitting as a right handed hitter. Swihart is also extremely successful when there are RISP, something many Red Sox fans feel the team is lacking at the major league level this season. He is currently hitting .364 with RISP with 12 hits in 33 at bats. He has 15 RBI's with RISP and 4 doubles.

Swihart could be considered a the next superstar in the Red Sox system, but he has Ryan Lavarnway currently taking control of the starting spot in Pawtucket. What do you think about Swihart, is he the answer to the Red Sox problems at catcher? Leave your answer in the comments below or tweet them at me right here.