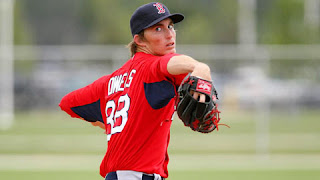 Henry Owens is the #1 prospect in the Red Sox farm system, and is currently pitching in AA with the Portland Sea Dogs. He is ranked the 27th prospect in all of Major League baseball and is ranked 2nd out of all left handed pitchers. Owens was drafted 36th in the 2011 draft straight out of high school. He made his debut in 2011 and really showed progress in 2012 in single A. His breakout year in the minor league was in 2013 when he pitched for both A+ Salem and AA Portland with a record of 11-6 with a 2.67 ERA.

Owens has continued to be dominant this season and has quickly skyrocketed to the #1 prospect in the Red Sox system. In 8 starts this year Owens is 4-2 with a 3.30 ERA. He has thrown 2 complete games and has 1 shutout on the year. He has 49 strikeouts and only 23 walks. His most recent start may be his most impressive, yet also concerning. On Wednesday, May 14th Owens pitched 4 innings of no-hit baseball before being removed from the game. He had thrown 8 strikeouts and had walked 5. This was the second outing in a row that Owens has walked 5 batters and the third time this season he has walked more than 4 batters. The outing was the shortest of the season by Owens.

Owens is a great prospect for the Red Sox, someone who 4 or 5 years down the road could be the ace of the pitching staff if he continues to develop at the rate he has since joining the Red Sox minor league system. Yet Owens needs to gain better control of his pitches before he thinks about being called up to the majors or even AAA Pawtucket. This season Owens is averaging a walk every 2 innings, something that must be cut down before he is called up. His best pitch is his fastball, currently reaching low 90's but appears faster with a deceptive delivery.

Many people may think that Owens could become trade bait when the MLB trade deadline approaches. I for one am strongly against this, and could see Owens as a homegrown talent that could become the face of the franchise. While he needs to develop more, and we will not see him in the majors for at least two more years, Henry Owens has the potential to be a star. Have you seen him pitch? Let me know what you think about the youngster in the comments below or on twitter by clicking here.