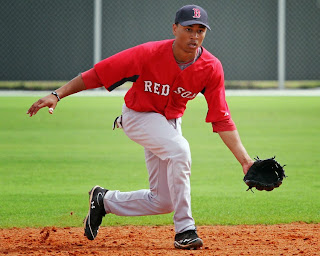 If you are the casual fan of the Red Sox you may not know the name Mookie Betts, yet if you follow the Red Sox and their farm system you will know that Betts may be a name heard cheered loudly and often at Fenway Park soon. Betts is the #5 prospect in the Red Sox system and is the #58 prospect in all of the MLB. This is quite the accomplishment for the youngster, who is already playing with his fourth team in the Red Sox minor league system in just 3 years. He has been proving himself at every level and has been flying up the ranks.

One of the most impressive accomplishments that Betts has had is r, going back reaching base in 52 consecutive games going back to last season. He is yet to hit below .265 anywhere he has played yet, and currently is hitting an unreal .430 through 22 games with the AA Portland Sea Dogs. Betts had a tough start last year, hitting only .145 through May 2nd, has since hit .358 in almost 1 calender year with 16 home runs, a .435 OBP (On Base Percentage), and 44 steals in 48 attempts.

There is only one issue with Betts, he is primarily a second baseman, a position currently filled by Dustin Pedroia until 2021. While much can be said about Betts and his sky high numbers, he is not yet ready to play in the majors and has lots of work to do. But to wait 7 years is a waste, and he will be long past his prime at this time. The answer to the question of where to play Betts is a complicated one to answer, as the Red Sox infield is full of young talent that seems to have each of their positions figured out. This problem is a good problem to have, but a difficult one to solve. Betts has proved himself at every level so far and he shows no signs of cooling off. Betts is on pace to be a superstar at the major league level, hopefully the Red Sox don't trade him away due to lack of need.

What do you think about Betts? Have you seen him play, if so is he as good as he is hyped up to be? Leave your answers in the comments below or tell me on twitter.