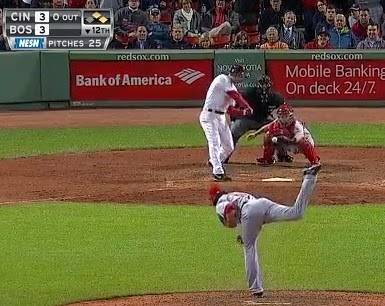 Grady Sizemore's RBI single off the base of the Green Monster in the bottom of the 12th inning brought home David Ortiz with the winning run as the Red Sox outlasted the Cincinnati Reds 4-3 at Fenway Park.

Ortiz singled through the Cincinnati shift leading off the inning. Mike Napoli followed with a single up the middle which set the stage for Sizemore's heroics.

Craig Breslow was the winner he relief. He and Andrew Miller pitched a combined 3 innings, getting 6 of their 9 outs on strike outs.

Boston had an early 1-0 lead courtesy of an RBI ground out by Mike Napoli that scored Dustin Pedroia. The Reds evened things up in the top of the 2nd on an RBI single by Skip Schumaker.

The Red Sox took the lead again with 2 runs in the bottom of the 3rd inning on a bases-loaded walk to Napoli and an RBI single by Grady Sizemore. Cincinnati tied the game with a pair of runs off reliever Junichi Tazawa.

Pedroia and Sizemore led the Sox with 3 hits. Pedey had a pair of doubles; he now has 300 career two-baggers.

Felix Doubront started for Boston going 5.1 innings. He was charged with 1 run on 5 hits and 3 walks while striking out 3. He threw 58 of his 97 pitches for strikes.