As the son of a girl from the Flatbush and Bedford-Stuyvesant sections of Brooklyn, I grew up in a home where the Brooklyn Dodgers were practically worshipped...and where "wait 'til next year" was finally realized in that magical summer of 1955 when "da Bums" finally took out the Bronx Bombers in the World Series.

Needless to say, my Mom was among the heartbroken when the Dodgers moved from Brooklyn to Los Angeles, so naturally when the New York Mets were added as an expansion team, the fact that some of the original Mets were former Brooklyn Dodgers was all she needed to jump on the new team's bandwagon. Among those players was an infielder who had originally come up in 1954 with Brooklyn and was with the team in '55 - Don Zimmer, who passed away on Wednesday in Florida at the age of 83.

For 66 years, Don Zimmer did nothing but make a living in baseball, first as a player, then as coach, manager and ultimately as a senior advisor. From the minor leagues, to the major leagues, to Japan, and back to the United States, Zim was the prototypical baseball lifer.

It might not have been obvious to those who only knew Zim from his post-playing days by which time he had started to bear a physical resemblance to the cartoon character Popeye, but while with the Dodgers he was something of a heartthrob among the female section of the fanbase and was actually popular enough to warrant inclusion in a TV commercial with the likes of Pee Wee Reese and Roy Campanella.

Red Sox fans mostly knew Zimmer after his playing days had ended, since he had played the majority of his career in the National League. Older fans will remember him as one of manager Darrell Johnson's coaches, on the 3rd base coaching lines for Game 6 of the 1975 World Series yelling "NO! NO! NO!" when base runner Denny Doyle thought he heard "GO! GO! GO" and was ultimately thrown out at the plate.

Three years later he would be the manager of a Sox team that blew a double-digit lead only to tie things up at the end of the regular season and force a one-game playoff against the Yankees, better known as the "Bucky Bleeping Dent" game.

Long-time Boston fans know all-too-well what happened in that summer of 1978. If you're new to Red Sox Nation, do a Google search for "Don Zimmer Bill Lee gerbil Buffalo Heads" and you'll get a pretty good overview of what went on.

And of course, there was the moment in October 2003 during the playoffs when he and Red Sox pitcher Pedro Martinez had their on-field scuffle following a pitch thrown by Roger Clemens near the head of Manny Ramirez.

Earlier that summer, I found myself in Yankee Stadium watching batting practice. Alfonso Soriano, then in his first go-round with the Yankees, was in the cage taking his pre-game hacks and hitting one line drive after another into the outfield. Looking over to the first base side of the cage, I saw Don Zimmer and thought I would wander over to the cage and strike up a conversation with someone regarded as legendary among people inside baseball.

Zim shot me a glance, and I thought, "Great...this is an opportunity to talk with him." 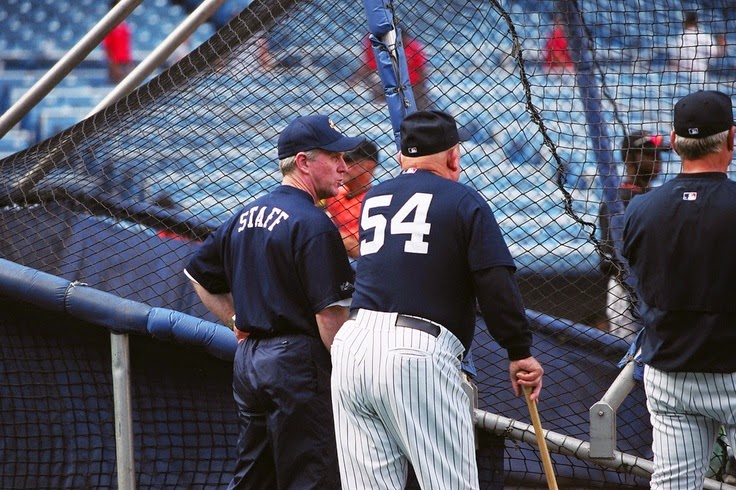 "Does he have the best hands you've seen since (Hank) Aaron?" As the question came out of my mouth, all I could think of was the kid in "A Christmas Story" writing what he thinks is this world-class theme on why a BB gun is the best Christmas present in the entire world only to hear those fateful words, "You'll shoot your eye out, kid."

Zim looked over at me, grunted some kind of response, then turned toward someone else and that was the end of that - the baseball version of that kid's glasses breaking from a BB ricochet.

So much for my attempt to engage someone regarded by so many within the game as a great baseball man in idle conversation.

As I wandered sheepishly over to the other side of the batting cage I wondered if it might really be that obvious that I still carried a grudge from 1978.