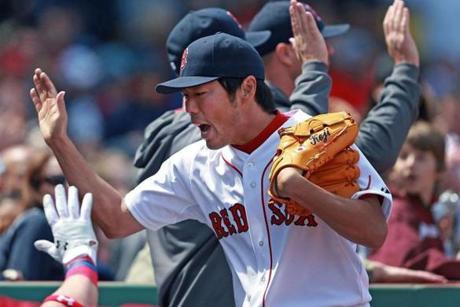 This must be the week that those people selling retirement homes in Florida came through town.

First there was John Lackey who might be looking to hang up the cleats.

Now we have these comments from Koji Uehara through his translator, "Every year I consider my last year."

When acquired in a 1-year, $4.25 million deal (with a vesting option for 2014) it was expected to be for a veteran pitcher on a farewell tour through Boston before leaving town as a 39 year old heading into retirement.

One year later, one World Series ring richer, his dominance has altered the conversation.

The Red Sox who are currently six games under .500 and 9.0 games back from the division leaders would be done with the 2014 season without him. Uehara has recorded 13 of 13 save attempts this season and allowing just two runs in 27 2/3 innings.

His record since becoming the Red Sox closer is remarkable.

He has converted 39 of 41 save opportunities while limiting opponents to a .131 batting average. He’s struck out 111 batters, walked six and still hasn't allowed any hitter in the majors more than three hits.

If you are the Red Sox do you give a qualifying offer or invest outright in your aging closer?

Becoming a free agent at the end of this year for the second time in his career will have the Red Sox pretty much having to give him a qualifying offer (estimates are that it would reach $15 million). This is almost unheard of for a soon to be 40-year old closer.

One could not imagine Uehara not accepting that offer, but it is also hard to imagine another team sacrificing a draft pick to sign the 40-year old closer.

Taking a look around the rest of the organization we see that the Red Sox might have to, in a worst case scenario, offer John Lester a qualifying offer. As there are no other noteworthy players expected to receive them in the coming off season, Uehara's chunk would be very easy to fit into the expected 2015 payroll.

While one would have to feel that this feels out of the range for a closer, the options to replace Uehara are very risky. You could get two quality relievers with the money you save, but that strategy fails more than it succeeds as has panned out this year with the likes of Edward Mujica.

What is your projection for High-Five-City?

He might just be fading into the sunset after this year at the top of his game.