Recap - apparently this Holt kid can play center, too

Jon Lester pitched into the seventh inning and the Red Sox managed to get just enough offense off of Phil Hughes as Boston nipped the Minnesota Twins 2-1 at Fenway Park.

But the story of this see-saw 2014 Boston baseball season continues to be the Legend of Brock Holt. Simply put, is there anything this kid can't do? 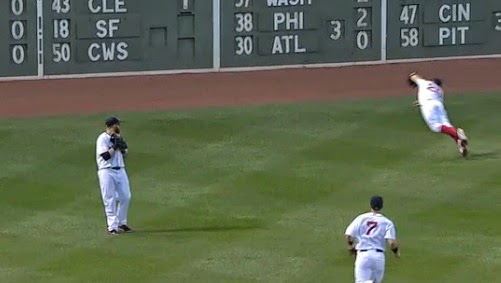 Making his first career appearance in center field, Holt made a ridiculous circus catch of a fly ball that left fielder Jonny Gomes apparently lost in the twilight. After the game, Lester described the catch from his perspective - "To be honest, I didn't know where the ball was. Jonny's running in, [Stephen Drew's] running out, guys are pointing and screaming and yelling. All of a sudden, Brock just dives out of nowhere for a ball in kind of left-center, and I was looking more for a ball in dead left field." The picture shows what Lester described but still doesn't do the play justice.

Holt, of course, then led off the bottom of the third inning with a double, stole third, and then scored on a Xander Bogaerts sacrifice fly to push the Boston lead to 2-0.

Holt and Dustin Pedroia each had two hits; Holt scored both Boston runs.

Lester endured a shaky 33-pitch first inning but settled down and at one point retired eleven Twins in a row. He went 6.1 innings allowing one run on four hits and one walk while striking out six. His record improved to 8-7 with the win. Edward Mujica struck out two in a clean ninth inning for his second save of the season.