The Red Sox were held to just one hit for the third time this season as the Rays beat Boston 7-0 at the Trop on Saturday night.

Dustin Pedroia was slammed in the head by Logan Forsythe's right forearm while Logan was sliding into second base in the second inning. Pedroia left the game with what was called symptoms consistent with a concussion and could be out for a week. 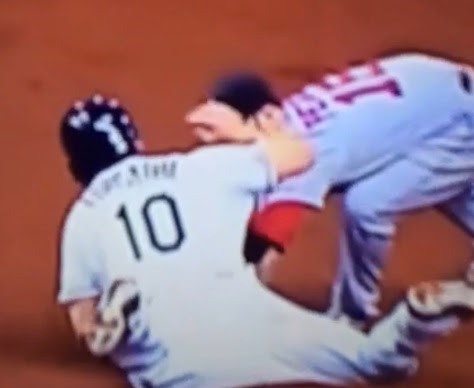 Though video replays appeared to show Forsythe extending his forearm to hit Pedroia (photo), post-game comments from the Red Sox locker room indicated that no one felt the contact was intentional.

The Rays took a 3-0 lead in the bottom of the second inning of starting pitcher Allen Webster who was inconsistent in suffering his third loss of the season. He was charged with six runs on five hits and three walks over four innings.

Will Middlebrooks had the only Boston hit, a single in the fourth inning as Tampa starting pitcher Jake Odorizzi shut down the Red Sox over his sevens innings of work.