Christian Vazquez: the rock behind the dish

While Christian Vazquez has struggled at the plate, his defensive efforts have been nothing short of spectacular. Vazquez does not profile as the next great offensive catcher, but what he can be is a catcher who scares opposing runners from stealing, a great leader of the pitching staff, and a great presence behind the dish. 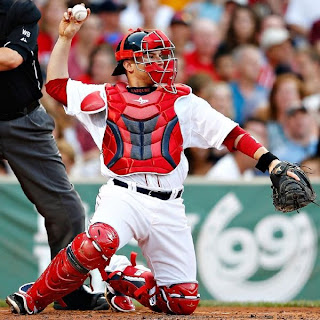 One great contribution that Vazquez brings to the Red Sox is his arm. Vazquez has nailed 14 of 28 runners attempting to steal. This rate of 50% is the highest among catchers who have played in at least 50 games. He also has 4 pickoffs to go along with it.

Vazquez's release time is a big reason why he is able to throw out 50% of runners. Vazquez's release time on a throw down to second base was clocked at 1.77 seconds in spring training. The MLB average is 1.95. This difference is huge. Everything needs to be precise for a catcher to deliver the ball that quickly. Great receiving skills, good footwork, and a quick release are all needed. Not to mention the fact that it still needs to be accurate. Vazquez's arm has most certainly made other runners think twice before running.

The importance of a catcher controlling the running game can't be understated. Maybe a runner does not score on a single with 2 outs because he did not steal second. Maybe an inning ending double play is kept in order. Forget about controlling the running game. Vazquez practically eliminates it. This is just one bonus the Red Sox get with a great catcher like Vazquez.

Christian Vazquez has also tremendously helped the Red Sox pitching staff. The Red Sox team ERA is 4.02. With Vazquez behind the plate, the team ERA is 3.81. That is a great improvement. The Sox pitchers are clearly comfortable throwing to Vazquez and they have great reason to feel that way. Vazquez has only allowed 8 passed balls this season. This gives pitchers, like Koji Uehara, the confidence to throw a splitter in the dirt with a runner on base and know that Vazquez will stop it if it bounces. Keep in mind, he is only a rookie. The more he plays, the better he will become at calling a game, blocking balls in the dirt, and learning opposing hitters' weaknesses.

Going forward, the Red Sox appear as though they are going to have a young pitching staff. They are going to need to have a catcher who is defensive minded and can handle the staff. Christian Vazquez can be that rock behind the dish.