When Joe Kelly threw 7 innings of 2 run, 2 hit ball last night, he showed just how dominant he can be on any given night. Although his Red Sox ERA is higher than he would like at 4.00, he has definitely passed his audition to be a part of the rotation next year. 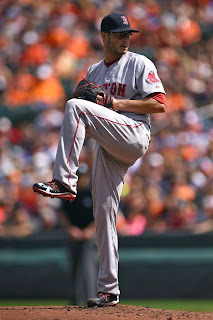 At only age 26, Joe Kelly should be entering the prime of his career. He will have a lot of room to improve as he acclimates himself to facing American League teams. Kelly has already beaten three teams with formidable lineups: the Yankees, Royals, and Orioles. This shows that he will be able to handle the deeper AL lineups.Kelly's style of pitching should also translate well to the AL. Kelly is a hard thrower who is a sinker ball pitcher. This will bode well for him as Fenway is traditionally friendlier to ground ball pitchers than to fly ball pitchers. The numbers back Kelly as he has only allowed 5 homers since joining Boston.

Kelly has also proven to be an innings eater in his short time with the Red Sox. He is averaging 6 innings per start with Boston. In a day and age where bullpens are being used at an all time high, a guy who can go out and throw 6 innings each time out is very important to help save and limit the bullpen use.

Joe Kelly is also under team control through 2018. He isn't even arbitration eligible until 2016. This gives the Red Sox 4 more years of an affordable starter who is a little more proven than their other young pitchers.

One knock on Kelly is the amount of batters he walks. In just 54 innings with the Red Sox, he has already walked 30 hitters. This could be problematic as walks always lead to runs. I am not worried though. Kelly has a whole off-season and spring training to improve his control.

The verdict: Joe Kelly should be a part of the Red Sox rotation next year. As a number 1, 2, or 3 starter? Preferably not. As 4 or a 5 who is affordable, an innings eater, and posts a solid ERA while doing it? Absolutely. That would also mean that the Red Sox have a very deep rotation. Kelly has the potential to be a big part of the rotation for years to come.


Stats and picture from espn.com