4 Reasons the Royals will win the series 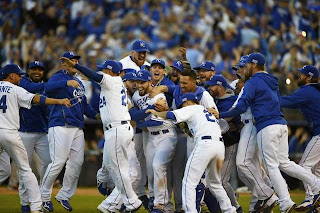 After missing the postseason for the last 29 years, the Royals are back and better than ever. They have posted a dazzling 8-0 record so far in the playoffs. However, the Giants will make for a tough opponent. Their pitching and knack for the big hit can't be denied and will no doubt make it entertaining. While this will be a very close World Series, here are 4 reasons why I will give the edge to the Royals.

1.) Stolen bases: This is the name of the game for Kansas City. The Royals have electric base stealers all over their club. Jarrod Dyson, Lorenzo Cain, and Alex Gordon are just a few of the potent base runners who could wreck havoc in this series. So far in the postseason, Royals base stealers are 13 for 16 in stolen base attempts, an outstanding rate of 81%. While Buster Posey is a great defensive catcher, the pressure is also on the pitchers to keep the runners close. If the tying run is on first in the 9th, a stolen base to move the runner into scoring position would be huge (aside-thank you Dave Roberts). The Royals have the speed to get it done.

2.) Bullpen: This may be their greatest strength. Wade Davis, Jason Frasor, Greg Holland, and Kelvin Herrera all have ERAs under 1.13 in the playoffs. That's insane. They are on an all time great roll and I do not expect to see them slow down. If the Royals are leading after 5 innings, it will be incredibly tough for the Giants to come back.

3.) Outfield Defense: While defense in the regular season is not always noticed, in the playoffs it always is. Every run counts. Saving a run is just as important as scoring a run. The defense of Cain, Gordon, and Dyson can't be mentioned enough. They are three of the best defensive outfielders in the game. All in one outfield? Royals pitchers love that. They all get great jumps on the ball, have great closing speed, and can throw runners out. Their ability to take away hits will be huge if the Royals are to win it all.

4.) Home Field Advantage: Since the American League won the All Star Game, the Royals have home field advantage for the World Series. Although it is not mentioned often, playing at home is truly and enormous advantage. Having the fans on your side and batting last are both so important, especially to start a series. In addition, the Royals built themselves to play in an American League stadium, with a DH. Having a DH for 4 games instead of 3 is really big for the Royals. Having Billy Butler in the lineup as much as the Royals can will only help their chances to win it all.

Who do you think will win the World Series?
Comment below or reach out to me on twitter @Ian_Vescera
Click here to read more posts by Ian Vescera.
Stats from espn.com
Picture from kansascity.com