While all the hype in Boston has been about potential moves (Pablo Sandoval or Jon Lester signings), the Red Sox actually made a move today. Boston claimed 27 year old corner infielder Juan Francisco off of waivers from the Toronto Blue Jays. He hit .220 with 16 homer runs and 43 RBIs last season. 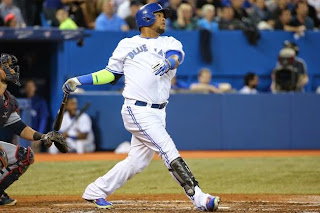 Francisco is actually very comparable to Pablo Sandoval as a player (although not nearly as talented). He is also a larger athlete as he stands at 6'2" and checks in at 247 lbs. Juan Francisco, like Sandoval, is also switch hitter who is much better from the left side. 15 of Juan Francisco's 16 home runs were as a lefty this year. Francisco is versatile defensively as he plays both 1st and 3rd base. However, this "versatility" isn't that helpful since he is regarded as a bad fielder. However, there is no denying his power from the left side and his offensive capability.

Before you get to know him to well, there is a possibility he does not even stay with the team. Juan Francisco is arbitration eligible. As an arbitration eligible player, he can be non-tendered which would then make him a free agent. He is projected to make roughly $2.2 million through arbitration. Francisco is definitely worth keeping around as a bat off the bench. With power down across the league, having a guy off the bench with 20 homer capability is nice. Additionally, the Sox do not have a lot of lefty hitters so this could be the perfect home for Francisco.

Thoughts on the acquisition of Juan Francisco?
Comment below or reach out to me on twitter @Ian_Vescera
Click here to read more posts by Ian Vescera.
Stats from espn.com
Photo from bleacherreport.com