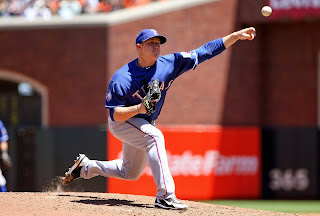 While most people in New England had an off day from work and school, the Red Sox front office did not. The Sox struck a deal earlier this evening sending pitching prospect Anthony Ranaudo to the Texas Rangers for left handed reliever Robbie Ross Jr. The Sox announced the move via Twitter as seen in the tweet below.

The Sox acquire Robbie Ross Jr. who is coming off of a disappointing year to say the least. In 78.1 innings, Ross posted a 3-6 record to go along with an abysmal 6.20 ERA. In this lost year, Ross started 12 games. Starting these 12 games maybe a reason why his ERA ballooned. He is much better suited to be a reliever. His prior two seasons support that claim. Before that, Ross was a very good reliever. In 2013, Ross went 4-2 with a 3.03 ERA in 62.1 innings. In 2012, he went 6-0 with an ERA of 2.22 in 65 innings. Ross is only 25 years of age and has the potential to bounce back this year. He is projected to fight for a bullpen spot with other lefty relievers Craig Breslow and Tommy Layne.

The Sox did give up a lot to acquire Ross. Anthony Ranaudo is the man heading back to Texas. Ranaudo has been one of the Sox top pitching prospects. Ranaudo had a fantastic season with the PawSox as he was named the International League Pitcher of the Year. He went 14-4 with a 2.61 ERA and had 111 strikeouts in 138 innings. His major league season did not go as well. Ranaudo went 4-3 with a 4.81 ERA in 7 starts. Ranaudo did show some promise at the major league level but it was not enough to keep him in Beantown. The Sox have numerous starting pitching prospects on the way and they felt that he was not going to be a part of the future plans. However, Ranaudo will have the opportunity to win a starting spot in Texas. Ranaudo would not have had the opportunity in Boston so it is a personal win for him. It might be a win-win deal for both sides as Texas gets a potential starter and the Sox gets a much needed lefty reliever.

Thoughts on the trade?
Comment below or reach out to me on twitter @Ian_Vescera
Click here to read more posts by Ian Vescera.
Stats and photo from espn.com