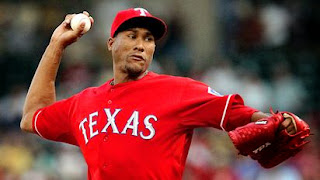 Yesterday, the Red Sox signed free agent reliever Alexi Ogando to a one year deal and officially announced the signing via the tweet seen below. Per USA Today reports, the deal is worth $1.5 million and could be worth up to $3 million with incentives. Ogando has been both a starter and a reliever in his career and flourished in both roles. As a starter, he is 19-12 with a 3.40 ERA in 48 games and was even an All-Star in 2011. However, given his recent injury history and the bulk of starters the Sox have, he will likely be used out of the bullpen. He has also thrived in this role as he is 9-4 with a 3.25 ERA in 135 career games as a reliever. Ogando is a big power arm and can really dial it up out of the bullpen to get strikeouts. As a reliever, Ogando has struck out 132 batters in 138.1 innings, almost a strikeout per inning. As a starter, he has only struck out 193 in 267.2 innings. Provided his health is there this year, he should have a nice season. Boston does not have many power arms out of the bullpen so the signing of Ogando is key. As we saw in the playoffs, power arms out of the bullpen, like in Kansas City, wins games for teams. For only $3 million at most, Ogando could prove to be a steal for the Red Sox.

To make room for Ogando on the 40-man roster, the Red Sox designated Drake Britton for assignment. The 25 year old left hander has pitched in 25 games for Boston over the past 2 years posting a 1-1 record with a 2.93 ERA out of the bullpen. The addition of Robbie Ross may have pushed Britton out the door. The Red Sox will have Tommy Layne, Craig Breslow, and Ross fighting for bullpen spots which would have made it very tough for Britton to crack the opening day roster.

Thoughts on the signing?
Comment below or reach out to me on twitter @Ian_Vescera
Click here to read more posts by Ian Vescera.
Stats and photo from espn.com
Additional info from USA Today