Red Sox and BC honor number 3 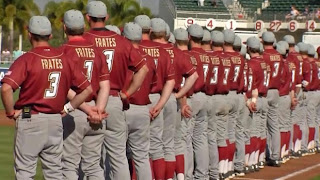 On March 3rd, Boston College played in its annual Spring Training game with the Red Sox. BC went on to lose 1-0 in a hard fought contest. For most of these college kids, this is the biggest stage they will play on. Most of them will not get drafted. A game against a major league team, especially the Red Sox, is something that they will always remember. This year, the players on both teams have another reason to remember the game. It will be remembered as the day they honored Pete Frates.

Both the Red Sox and Boston College wore "Frates 3" on the backs of their jerseys. Before the games, both teams lined up along the foul line to honor him. The Frates family presented John Farrell with the game ball at that time.

The jerseys worn from the game on March 3rd are going to be auctioned off to raise money for the Pete Frates #3 Fund. Upon learning this, David Ortiz was very pleased. "Good, that's real good," said Ortiz. "That's what we're here for, is support. I got to meet him before a game last year. It's inspiring what he's done. It teaches you that you have to enjoy the moment. You never know. You're here today; you don't know where you're going to be tomorrow."

Everyone around the Red Sox spoke highly of Frates that day, including Red Sox executive vice president Charles Steinberg. "He's done more in his life than some people do when they live to be 100. Last year was stunning," said Steinberg. "Who changes the world in one fell swoop like that?"

Pete Frates did. Over $200 million has been raised since the Ice Bucket Challenge was created. Even though the challenge is out of the limelight now, it is nice to remember Frates and all those who are still struggling with ALS.

Thoughts on the tribute to Frates?
Comment below or reach out to me on twitter @Ian_Vescera
Click here to read more posts by Ian Vescera.
Photo from boston.cbslocal.com
Information and quotes from mlb.com