David Lough's solo home run in the bottom of the 10th inning off Koji Uehara pushed the Orioles past the Red Sox 5-4 at Camden Yards on Saturday night.

Xander Bogaerts 10th inning home run, his 1st of the year, had given the Red Sox a 4-3 lead over the Orioles. Adam Jones led off the bottom of the inning with a triple and scored the tying run on a sacrifice fly.

Jimmy Paredes' solo home run in the bottom of the 5th inning had snapped a 2-2 tie and given Baltimore a 3-2 lead heading into the bottom of the 9th. A leadoff walk to Dustin Pedrioa, followed by a pair of infield hits and an error allowed Pedroia to score the tying run.

Paredes had his 1st career 4-hit night and drove in the 1st Orioles run with an RBI double in the 2st inning. He came in to score on a sacrifice fly by Chris Davis off Red Sox starter Justin Masterson. 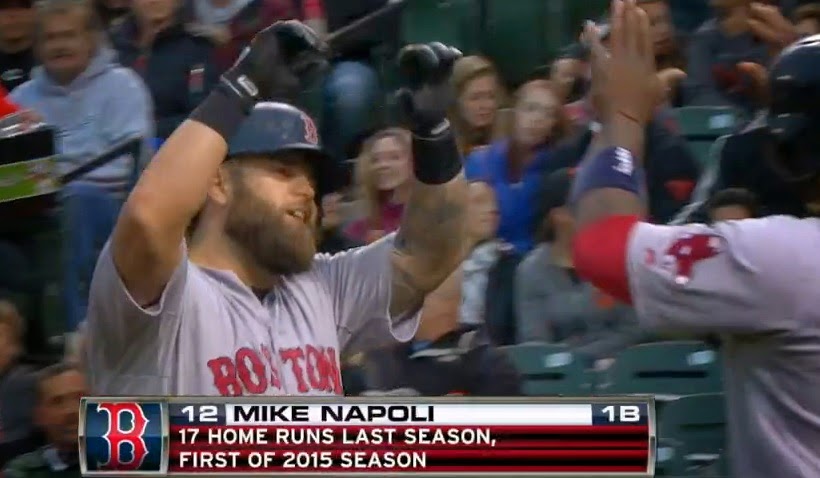 Boston answered back in the top of the 2nd on Mike Napoli's (pictured) 1st home run of 2015, a blast that drove in Hanley Ramirez.

Masterson got into rather uncharted waters of late for a Red Sox starter - 7 full innings. The last Boston starter to get into the 7th was Rick Porcello on April 13th, the Red Sox home opener. He was charged with 3 runs on 7 hits. He walked 1 and struck out 3.

Matt Barnes, called up earlier today when Shane Victorino was placed on the 15-day disabled list, made his 2015 debut in the bottom of the 8th inning.

Napoli had 3 of 8 Boston hits in the game. Baltimore starter Wei-Yin Chen walked 1 and struck out 5 in his 8 innings of work.

The game was marked by a heavy police presence outside the ball park due to protests going on in Baltimore. An announcement was made in the 9th inning telling fans to remain in the stadium after the game.