The Red Sox slapped out 11 hits and received strong starting pitching from Justin Masterson as they beat the Phillies 6-2 at Citizens Bank Park in Philadelphia. 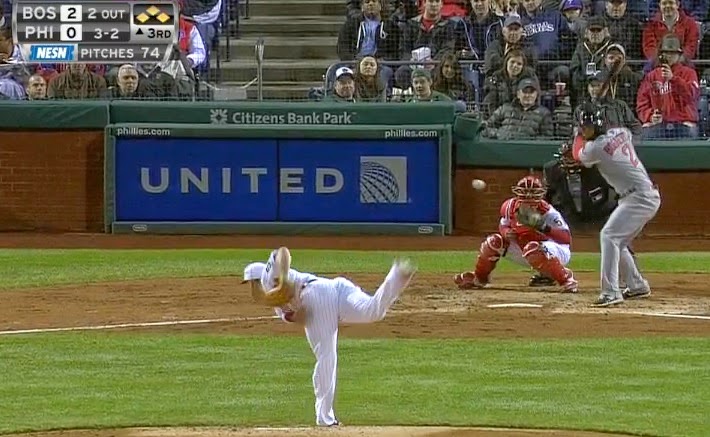 The Red Sox did all of their damage with two outs in a 6-run third inning. Shane Victorino's bases-loaded infield single plated the first run followed by a walk to Ryan Hanigan. Xander Bogaerts (pictured) hit a soft, bases-clearing triple and Masterson drove in his first career run with an RBI single to center.

The Phillies answered back with a pair in the bottom of the inning but never really threatened after that.

Masterson pitched a solid 6 innings in making his first start since returning to Boston. He allowed just 2 runs on 3 hits; he walked a pair and struck out 7.

Craig Breslow pitched in and out of trouble in the 7th, aided by a terrific running catch by Victorino in right to end the inning. Tommy Layne pitched a clean 8th inning and Edward Mujica closed things out in the 9th.

Bogaerts was on base 5 times including 3 hits; Ramirez, Victorino and Masterson each had two hits for Boston.

The Red Sox open a 3-game weekend series against the Yankees in the Bronx on Friday night.