The Red Sox took advantage of sloppy Orioles defense in the 6th to score 4 times in a rain-shortened 7-1 win over Baltimore on Patriots Day at Fenway Park.

The win gave the Red Sox a split of their 4-game series against the Orioles. The Sox have yet to lose a series so far in 2015. 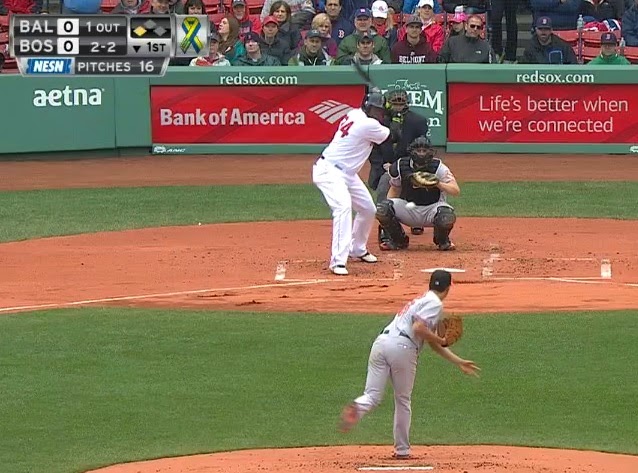 Boston took an early 1-0 lead in the bottom of the 1st inning sacrifice fly by David Ortiz (pictured) that scored Mookie Betts. The Orioles tied the game on a run-scoring double by Ryan Flaherty in the top of the 2nd.

The Red Sox scored 4 times in the bottom of the 3rd and only needed 1 hit. Two Baltimore errors and a bases-loaded walk padded the Red Sox lead to 5-1.

Boston scored twice more in the 6th. Dustin Pedroia had an RBI double followed by a run-scoring single by Allen Craig.

Justin Masterson went 5 innings for the win, allowing just 1 run on 3 hits and 3 walks while striking out 6. He threw 53 of his 93 pitches for strikes to improve his record to 2-0.

The Red Sox wore home jerseys with "BOSTON" across the front with "B STRONG" patches on the left chest in commemoration of the Patriots Day bombing 2 years ago.