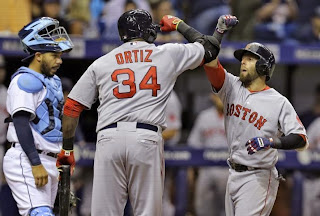 One month down and hopefully six left to go. All in all, the Boston Red Sox are off to a decent start at 12-10. They are tied for second place in the division with Tampa Bay and sit just one game back of the first place New York Yankees (that feels wrong to say). Before we start May, let's recap the Sox 22 games into the year.

1) The offense-This Red Sox offense is clicking right now. They have scored 113 runs which puts them as the 3rd highest scoring offense in baseball. Granted, they have benefited from numerous unearned runs, but good offenses take advantage of those opportunities. The offense also gives off a good vibe so far. Not everyone is hitting right now and they are still top 3 in the MLB in runs. When one guy struggles, someone else gets hot and carries the team for a few games. Every hitter also puts up a good at bat, no matter the score of the game. These Red Sox do not give outs away. I am yet to feel as if they are out of a game because of lack of offensive production. The same thing could not be said last year.

2) The panda and Hanram- The Sox could not have hoped for a better first month from these two newcomers. Ramirez is scorching hot right now to start the year. He is hitting .293 with 10 home runs and 22 RBIs. His defense has been not been up to par yet but he is certainly making up for it with his bat. Sandoval is also off to a fast start. Despite a .053 batting average versus lefties so far, Sandoval is hitting .312 with 2 homers and 11 RBIs overall. Both players have been exactly what the Red Sox hoped for.

3) The Brockstar- What can't Brock Holt do on a baseball field? The answer: nothing. Boston's super utility player has once again been phenomenal this season. Holt has provided great defense wherever he has played. His bat certainly did not cool down from last year. He is hitting .386 with 1 homer and 8 RBIs. His ability to play well seemingly every time he gets a chance is unreal. Even as a bench player, Holt has been one of Boston's best this year. He has been a great spark for this team off the bench just like another Boston reserve (Isaiah Thomas anyone?).

1) The Starting rotation- Big shocker right? The Red Sox rotation has been downright terrible to put it nicely. Their starters are dead last in starters' ERA with a 5.75 so far. Joe Kelly has the best ERA of the 5 starters with a 4.94. That's beyond bad. The other 4 starters have ERAs of 5.16, 5.34, 5.76, and 8.62. Believe it or not, the Red Sox had a -6 run differential in April despite scoring the 3rd most runs in the game. Much of that falls on the starting pitching. The rotation needs to be better if the Sox want to have a chance at October baseball.

2) Right field production- For the record, Holt is not being considered as a right fielder here. He is a super utility guy in my mind. Boston's three actual right fielders, Nava, Craig, and Victorino, have been awful to start this year. None of them are hitting above .160. Ouch. Right field has really been a dead spot for the Sox. If Nava and Craig can't hit, there is no point in giving them at bats. This platoon, with Victorino hurt, is not cutting it. Holt will definitely be seeing more regular playing time there if either one can't figure it out soon.

3) Mike Napoli- He went from 100 to 0 real quick. In spring training, Napoli look rejuvenated and it appeared as though he was about to have a career year. Instead, the Sox opened up in an NL park and he had limited playing time during the first series. After that, Nap has not looked the same. He is hitting just .162 and has only hit 1 homer. I have faith Napoli will turn it around but it is disappointing to see his awful start considering how great he looked in the spring.

1) Defense- While the defense has not been a train wreck, the Red Sox have not been playing great on this side of the ball either. I was surprised to see that they are ranked 11th overall in errors and fielding percentage. Ramirez has been very bad in left so far (as to be expected though), Craig's and Nava's defense in right has not been great, and even Pedroia has already made 2 errors. Wrap your head around this if you can: Pedroia has more errors than Hanley. Yup, that stat is correct.

2) Bullpen- While the pitching overall and starters specifically have been bad, the back end of the bullpen has actually been very good. Unsung hero Craig Breslow has rebounded from a down year last year. He is leading the Sox bullpen with a 1.38 ERA in 13 strong innings. Tazawa, Uehara, and Ogando have also been pretty good posting ERAs under 2.90 respectively.

Clearly you would rather have Player A in your lineup, right?

Player A is Mookie Betts. Player B is Jackie Bradley Jr. in 2014.

Thoughts on the month that was?
Comment below or reach out to me on twitter @Ian_Vescera
Click here to read more posts by Ian Vescera.
Stats and photo from espn.com