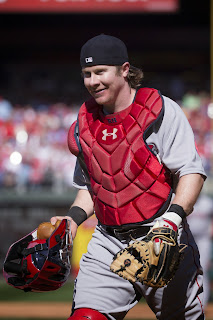 Ryan Hanigan exited tonight's 3-2 loss to the Yankees with a right hand injury. He left the game after an 0-2 Tommy Layne fastball hit Mark Teixeira in the hand and deflected off and hit Hanigan's right hand. After the game, John Farrell went on to say Hanigan will be out a substantial period of time.

Hanigan has been hit with numerous foul balls this season. He usually keeps his right hand out, making him prone to a potential injury. Unfortunately, that injury came now at a time where the catching depth is thin.

Early word on the street is that Blake Swihart, the Red Sox top catching prospect, will be called up to take Hanigan's place as noted in the Sean McAdam tweet below. Swihart was hitting .338 with no homers and 11 RBIs in Triple-A Pawtucket.

Industry source: Swihart will join Red Sox Sat. though Sox will continue to explore external options. Saltalamacchia not among them, however

Swihart started the year in Triple-A even after Christian Vazquez's injury because the Red Sox brass believed he needed more defensive seasoning. With this injury, the Red Sox can't afford any more time. For better or for worse, the Blake Swihart era begins now.

Thoughts on the injury?
Comment below or reach out to me on twitter @Ian_Vescera
Click here to read more posts by Ian Vescera.
Photo from masslive.com
Stats via milb.com