Alex Rodriguez's pinch-hit home run off reliever Junichi Tazawa in the top of the 8th inning led the Yankees to a 3-2 win over the Red Sox in the opener of their 3-game weekend series at Fenway Park. It was the 660th career home run for Rodriguez, tying him with Willie Mays.

The Yankees took an early 1-0 lead in the top of the 1st inning when Carlos Beltran doubled off Boston starter Justin Masterson to drive in Jacoby Ellsbury who had led off the game with a single. 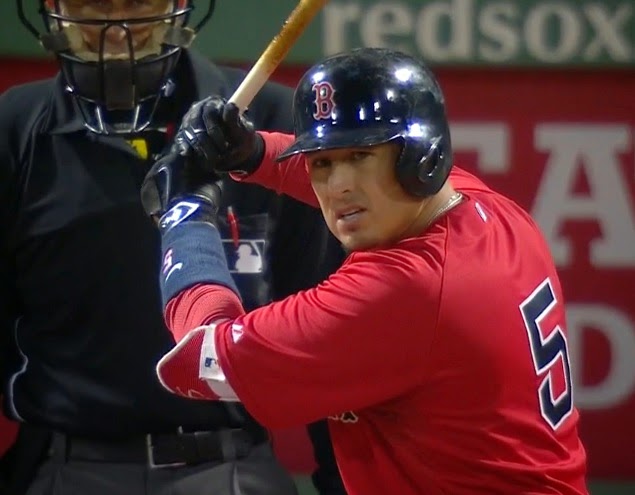 Boston tied the game in the 3rd on Mookie Betts' sacrifice fly that drove in Xander Bogaerts. Allen Craig (pictured) put the Sox ahead 2-1 an inning later on his 1st home run of the season.

Masterson was terrific. He went 6+ innings allowing 2 runs on 6 hits and 3 walks while striking out 2. He threw 50 out of 87 pitches for strikes.

Ryan Hanigan left the game in the top of the 7th inning after being hit by a ball that had deflected off of Mark Teixeira.

C.C. Sabathia was productive for the Yankees going 6 innings in the no-decision. The Red Sox scored 2 runs on 7 hits and 2 walks. He struck out 3 and allowed the solo home run to Craig.