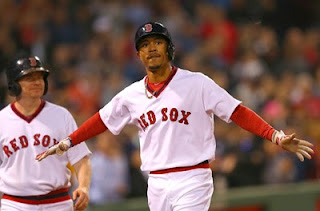 Masterson hasn't fared well against the Rays over his career, although he's only faced four possible batters in Tampa's lineup (DeJesus, Longoria, Cabrera and Loney). In 10 career starts against the Rays, he's 2-6 with a 7.07 ERA, which is his worst line against any AL team. He had a pretty solid performance on Friday night against the Yankees, going 6 innings and giving up 2 runs, but the Sox offense wasn't able to provide enough to capture the win which began the most recent 4 game losing streak. Last night Mookie Betts ended that streak by himself with two solo shots to lead the Sox to their 13th victory of the season. However the Sox didn't manage to get a hit until Mookie hit his first of two homers to lead the Sox to a 2-0 win.

The same lineup will once again be at it tonight against the Rays.

- Pablo Sandoval is hitless in this series, going 0-8
- Last night was the first career multi-homer game for Mookie Betts, who now has 4 homers on the season
- Evan Longoria notched his 1,000th career hit last night and is third in the organization behind Carl Crawford and Ben Zobrist
- Dustin Pedroia snapped his 8 game hit streak last night, he was batting .400 during that stretch