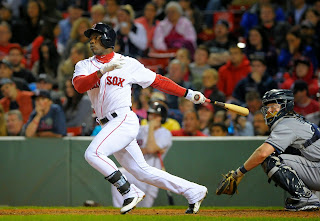 The Angels are in town for the weekend to face the Red Sox and will have Garrett Richards (3-2 2.29) on the hill tonight, making his first start at Fenway since his season was cut short due to an injury. Last August, Richards tore his patellar tendon while covering first on a play in the 2nd inning. Richards was having a phenomenal season, he had a 13-4 record and a 2.61 ERA and was in the hunt for the CY Young. This season he's jumped right back in where he left off and has led the Angels rotation to a 21-20 record which is good for 2nd in the AL West.

The big news today is the Red Sox have called-up OF Rusney Castillo from Pawtucket and optioned Jackie Bradley Jr back down to AAA. The move has been talked about recently over the past week and a half, but the time finally has come to show off the prized outfielder and he will be hitting 8th tonight. This year for the Paw Sox, Castillo has hit .293 in 82 plate appearances over 18 games. He's hit two homers, 5 doubles, 6 walks, is 6 of 8 in stolen bases and has knocked in 10 runs. It's a big enough sample size to show the Sox front office that he is capable of playing everyday in the bigs. He did happen to get into 10 games for the big league club late last season and batted .333 with two homers and 6 RBIs.

- Hanley Ramirez has yet to record an RBI this month in 61 at-bats, only two other players with more than 40 at-bats in the AL have done the same
- In 13 games this month, Brock Holt is hitting .158 with one RBI
- During the past 9 games, the Red Sox have scored more than 2 runs once
- Albert Pujols will eventually be heading to Cooperstown, and he's done quite well playing at Fenway Park, batting .341 over his career