The Angels put up nine runs in the top of the fifth inning to turn a close game into a 12-5 win over the Red Sox Friday night at Fenway Park.

The fifth, which featured a pair of Los Angeles home runs, lasted more than thirty minutes. 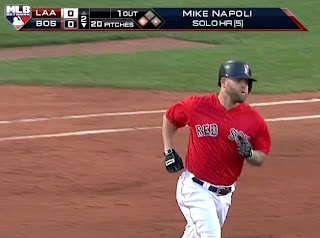 The Red Sox actually led 1-0 on Mike Napoli's (pictured) fifth home run of the year in the bottom of the second. After the Angels took the lead with a pair of runs in the top of the fourth, Boston answered back with a two-RBI double by Brock Holt.

The Red Sox added two runs in the seventh on an error and a run-scoring infield single by Dustin Pedroia.

Rusney Castillo made his 2015 debut for the Red Sox in right field. He was one-for-four batting in the eighth spot in the lineup. Pedroia led Boston with three hits; Holt had two hits.

The game "featured" three Boston errors including a drop of a very routine fly ball by Castillo in right.