Pedro is coming to town! 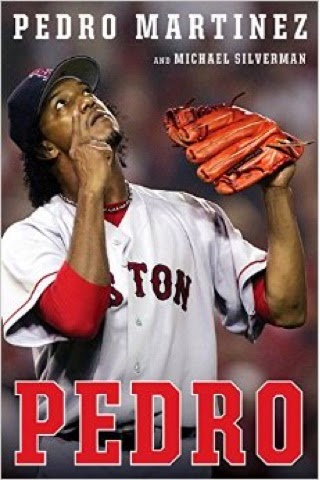 He's making a list, he's checking in twice..... Oh you know the drill. Pedro Martinez is coming to Boston to introduce and sell his new book. The book, "Pedro," was released yesterday, and if you are looking for insider details and stories from within the Red Sox dugouts, you've come to the right book.
Pedro Martinez needs no introduction, but in case you need the Cliff's Notes, he put on pitching clinics when he took the mound, including two years (1999 and 2000) of pure brilliance. He will be inducted as a Red Sox player into this summer's 2015 Hall of Fame in Cooperstown. And he can tell some great stories. If you search his book on the Internet, you can see some sneak peeks like how he felt about Manny Ramirez, saying "Just because we were teammates did not mean any of us understood Manny better than anyone else did." He also goes into detail about the 2003 Grady Little managerial boner and talks about why He threw  Don Zimmer to the ground during a brawl.
To see the man himself, take Thursday off of work and travel to Boston. Pedro will be signing copies of his book at the Barnes and Noble on Boylston Street at noon and Framingham's "The Paper Store" from 7pm-9pm. But get there early, and be good for goodness sake!
Like me? Tweet me! @red33sox