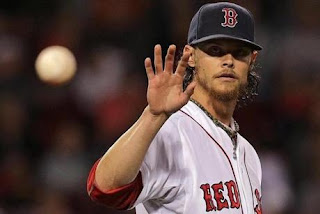 It's June 2nd but the weather in Boston makes it feel like its time for October baseball. Unfortunately this is probably the closest the Sox will get to playing meaningful baseball in October at the rate they are playing right now. On their most recent road trip against the Twins, who they will host tonight, and the Rangers, they managed to win 1 game. One win out of 7 games has now dropped them to 22-29 on the season and last in the AL East. The problems with this team have mounted over the past week and after another recent managers meeting, it appears that the Sox are back to square one.

Tonight's Sox starter, Clay Buchholz, hasn't entirely been the problem with this team. He's 2-6 with a 4.33 ERA but in his 10 starts this season, the offense has scored more than one run in 4 games! That's about as bad as it gets. He goes up against Mike Pelfrey (4-1 2.77) tonight, who got the victory last week at Target Field and has helped the Twins get to the top of the AL Central after the team had one of its best months in over two decades. Pelfrey has gone at least 6 innings in 5 of his last 7 starts and has only given up 2 runs in those games, which is what any team would hope for from starter 1-5. Buchholz in his last three starts has gone at least 7 1/3 innings with an ERA of 1.99, so Sox fans are hoping that something will finally break their way tonight.

- Twins Catcher Kurt Suzuki is batting .500 against Clay Buchholz in his career (9/18) and has a 13 game hitting streak against the Sox
- Dustin Pedroia is batting .357 in his last 10 games and last week against the Twins he went 5/12 with two homers
- The Twins are off to their best start of a season since the 2001 season, they started 33-16
- If you take out the start against the Yankees for Buchholz, where he gave up 10 runs, he's pitched 57 innings and has an ERA of 3.16