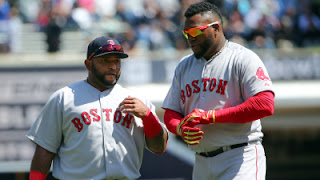 The Red Sox look to win the series against the Twins this afternoon, first pitch is at 4:05 pm. Steven Wright (2-2 3.90) will be getting his 4th start since replacing Justin Masterson after he was placed on the DL and he will be going up against Tommy Milone (2-1 4.76) who is making a spot start after Ricky Nolasco went down with an ankle issue.

Wright, who has pitched well since being called upon, will look to continue the current streak the Sox starters have been on by going deep into games. In yesterday's double header, Rodriguez (7 innings) and Porcello (8 innings) and collectively as a rotation in the last 21 starts their ERA is 3.29 and in 16 of those starts they've allowed two earned runs or less 16 times, but the team has gone 9-12. It's become obvious that the Sox offense has become the focal point for the failures of this team because in 54 games they've managed to just score 2 runs or less in 22 games, and haven't won a game yet when trailing after 8 innings.

So once again, John Farrell has played around with the starting lineup in an attempt to find some spark. Here is today's lineup:

- In 7 at-bats against Tommy Milone, David Ortiz has 3 hits and they're all homers
- Pablo Sandoval is currently 1-16 in his last 5 starts, dropping his batting average to .244